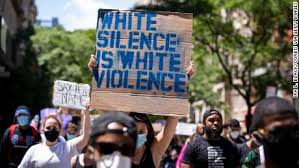 Have you ever had one of those “aha” moments when you least expect it?  It took me 50 years, but I recently had one after reading an article with my son for his English class titled, “A Talk to Teachers” by James Baldwin.

The article was based on a speech that Baldwin addressed to teachers in 1963—years  before I was born—but is just as relevant today—which is telling.  Baldwin, a black novelist and activist, had a deliberate purpose for this speech.  He was asking educators; those that influence the purest of minds, to rise up against all resistance and change the false history and prejudice that is being taught in school about African Americans.

Education in itself is supposed to develop independent thinking, reasoning and judgement in order to fairly and morally access the society in which we live and make needed changes as necessary.  If this is the case, how is it that we continue to address racism as a pesky mosquito whose sole aim is to suck the blood out of white privilege?  Perhaps this is harsh to some, but please open your minds for a moment as you read this article.

When we are born, we are born without prejudice, malice or understanding of stature in society.  If you are white and born in this country—you are automatically given 5 stars just because the color of your skin.  You can’t possibly recognize this out right because you know no different.  This is why it is so hard for many white people to grasp the concept of white privilege.  For a child born of color and born in this country—things are recognizably different to them from a very young age.

Baldwin assert, “…any Negro who is born in this country and undergoes the American educational system runs the risk of becoming schizophrenic.”

What does this mean?  Well, when you think of America, you think of justice, liberty, freedom, opportunity—the American dream.  This is what is taught in school.   But for a black child, they are also taught that their contribution to American history was nothing more than dutifully serving the white man.

It is from the onset that a black child assesses the society around him and begins to recognize that all things are not created equal.  Before he can even prove himself, he is labeled unworthy—unworthy of all the opportunities allotted to white people as their right of birth.  Acknowledging this is difficult for white people—who often ask, “What do black people want?”

This is where I had my “aha” moment.  Baldwin explains the silent rage that is building in that black child as he systematically get doors shut in his face.  Options are limited—they can either smile through rage or turn away from a society that long ago turned from them.  They can’t look toward politicians-- the government—or even the judicial system that was create to protect and benefit others—not them.   The simmering resentment, anger and rage is boiling now and is pointed directly at the power structure that continues to treat them differently simply because the color of their skin.

Please listen.  This rage is at the heart of the Civil Rights Movement of the 1960’s and the catalyst of today’s Black Lives Matter movement.  It’s much bigger than police violence against blacks.  It’s about society’s participation--- silent or otherwise—in allowing black people to be disproportionately subjected to less pay, harsher punishments, inadequate health care and very different life outcomes at all levels than white people.

I often hear or read in reference to the Black Lives Matter movement, “All lives matter, not just black lives.”  Yes, all lives matter, but that is not the point of the movement.  If all lives mattered, wouldn’t all lives be treated like they matter?  They are not.   Why is it so hard to admit this?  Because our ancestors were wrong!  What they did was wrong!  There is no way to justify it.  Saying it happened over 150 years ago and that black people should “get over it” is wrong.  We can only unlearn our history by not denying it.

We must teach our children the truth in school about our history—ugliness and all.  Let us acknowledge that freedom didn’t happen because of the consciousness of the white man, but because of the fight to be free of the black man.  Perhaps we can only restore justice by starting at the beginning—by teaching our children to think for themselves, to fight for what is morally right—against societies take on superiority that continues to divide and damage our country.

I don’t know what the answer is to end racism in our country.  I don’t know how we can restore the deep anger caused by years of oppression.  I guess I can start by asking, “How can I help?”