What to do about Debbie Downers in the Workplace 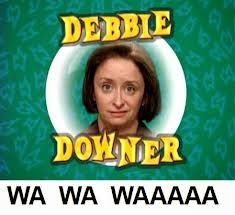 Q:  Dear Workplace Wonda, I have a co-worker that is very nice, but very cynical- Cynical about the company, cynical about her boss, and definitely cynical about the possibility of things getting better. I want to make our office a more positive place to work, but she is bringing down morale with her "can't do" attitude. Any suggestions?


Signed, Can Do Without "Can't Do" Co-worker

A: Dear Can Do Without "Can't Do" Co-worker, I feel your pain. Nothing is worse than working with someone who never sees the possibilities. I'm not saying we should go around farting rainbows, but some positivity and hope goes a long way!
One of my all time favorite skits on Saturday Night Live involves a character named Debbie Downer. Debbie is one of those "cynical" people who always kills the fun out of any situation with her negative comments. For example, in one skit, Debbie is at a wedding reception watching the newly married bride and groom enjoy their first dance as husband and wife. When the man next to her comments, "Aw, and don't they look perfect together?, Debbie responds, "Wish them luck. The only thing higher than gas prices in this country are divorce rates!"...Wah, wah, wahhhh. Man, Debbie cracks me up! Of course, Saturday Night Live writers were able to come up with a clever parody of an attribute most of us find anything but funny.


Sadly, many of these "Debbie Downer" types have been this way, to some extent, their entire lives. Personality traits can be imprinted from early childhood and simply be re-enforced throughout life. I'm not saying that it is an excuse for these negative types, just that it won't be easy for them to change. I see this often in my eleven-year-old son. When I told him once how important it was for him to work hard in school so that he could get a job to support his family someday, he responded, "I guess I'm just going to end up being a hobo!" Wah, wah, wahhhhh. Instead of seeing the positive outcome of hard work, he concentrated on the "HARD" part of the hard work and decided having quarters thrown at him by passersby as the ONLY option. When I got my new short hair do, instead of saying something positive, or nothing at all, he chose to tell me that I looked like Justin Bieber. I am in the process of trying to teach him that he doesn't have to say EVERYTHING he is thinking in his head.


The same can be said of the "Debbie Downers" in the workplace. Not only do they often think the worse, they also feel the need to verbalize it, whether their opinions have been asked or not. Instead of finding solutions to problems, they typically will state all the reasons something won't work or why they can't do a particular task.


So what can you do to turn "Debbie Downer" upright? The following are a few tips:


1. Exude positivity. Sprinkle fairy dust full of cheerfulness throughout the office. Nothing is more infectious that a positive attitude. As the saying goes, "When Debbie throws you mud, make mud pie!" Ok, maybe the saying had something to do with lemons and lemonade, but you get the drift. Each time Debbie says something negative, say something positive. Debbie might not even realize that she is being negative and will hopefully start mirroring your positivity.


2. Come prepared. Resistance to change is typical of the "Debbie Downer." Anticipate Debbie's reaction and find ways to engage her in the new process. Fear can be a precursor to negativity, so keeping Debbie informed and involved will ease some of her anxiety and hopefully make her more open to changes.


3. Take Debbie Down. Wow, that sounds harsh. But, hear me out. What I mean by that is if the soft approach doesn't work and morale and productivity is taking a dive, you might have to broach the subject with Debbie directly. You might pull Debbie aside and explain to her, in a non-confrontational way, how her negativity is affecting the team. If you don't feel comfortable addressing it yourself, you might have to inform your supervisor. Depending on the level of negativity and its affect on production and morale, the supervisor might feel that Debbie causes more harm than good and is not a good fit for the office or department. Unfortunately, Debbie might not only be "down," but "out!"


Nothing I've said will probably help you anyway. A matter of fact, statistics show that only 1% of all people that ask for help actually take the advice given. And of the 1% that do, they quickly realize the advice that was given blows chunks. Wah, wah, wahhhh.....


I kid! Rainbows and fairly dust for everyone!!!